Checklists–Bringing Surgery on Par with Aviation 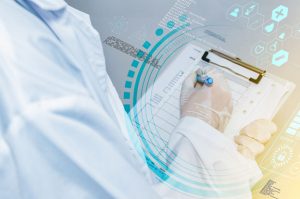 Far too often, healthcare fails to provide the level of reliability that is expected around a patient’s sense of quality. Even meeting quality and safe patient care 99.9% of the time may not be enough. For reference, if 99.9% was an appropriate threshold, Amazon would still be failing to deliver 1,600 packages per day and the US Postal Service would be losing 506,000 parcels per day.

Yet, healthcare can learn to apply many of the principles in high reliability to improve patient care. One of the lessons we consistently present as part of S3P’s efforts is the story of the Boeing Corporation Model 299.

At the time in World War II, it was a newly developed “flying fortress” that could carry five times the bombs of Martin and Douglas planes, and could fly both faster and twice as far. By all accounts, the US government believed that this was the plane that would help them end World War II.

Unfortunately, the plane proved to be unreliable and dangerous, killing the test pilot in the first attempt to fly it. According to other of the air force’s top test pilots, the controls were so complex with its fly by wire systems that it was considered “too much plane for one man to fly.” This complexity was leading to what Shojana refers to as “mistakes by good but fallible people in dysfunctional systems”

As a result, the Boeing 299 development team worked with the test pilots to create a checklist of all the steps required for takeoff, flight, landing and taxiing, using principles of human factors engineering and ergonomics to ensure it was as easy to use as possible. After implementation, 1.8 million test miles were logged without incident. Ultimately, the Army bought 13,000 aircraft, which became a key part of the bombing campaign that led to Nazi defeat in WWII.

The use of checklists, when properly considering stakeholder and surgeon input and appropriately implemented, can help us eliminate errors, improve team communications and reduce complications. S3P has used these with experts in the field to create several evidence and consensus-based checklists including:

While the original Boeing checklist was used on paper, as are many OR checklists, S3P is looking to adapt to the 21st century and catch up to Aviation’s digital checklists built into the controls of many airplanes. These checklists are tied directly to sensors within the aircraft and can respond with intelligent logic when items are needed and not needed. Today, these are being tested within the OR to help reduce burden on the team, while feeding back real-time, critical information for feedback and quick prototyping.

We look forward to sharing the results of these experiments to make care better with you as we all progressing to improving quality, safety, and value in Spine Surgery.